It’s December already! time is sure going fast. In my very first post I noted that I unofficially named November my restaurant month. The plan was to go to a different restaurant for my date nights with Dave. Since a lot of our dinners prior to this included a lot of homemade dinners I thought it would be a good idea to switch it up and use this as an excuse to indulge in all the things I’ve been craving (while still being a good girl during the week! {although, that’s debatable}). Five weekends… five restaurants!

week 1 – The Cheesecake Factory
After having prepped for the bikini competition and eating a lot of chicken and tilapia this had “naughty” all over it! On this day I was seriously craving sweet potato fries so I got that with their spicy crispy chicken sandwich served on a brioche bun and chipotle mayo and of course I had to add avocado slices.

week 2 – R.F. O’Sullivan’s Pub
The decision to go here came from a suggestion from the bestie, Kenne. When I was still on prep mode there was one night that I was seriously craving a burger and she immediately suggested this place for having the “best burgers” {I’ll be the judge of that!}. So I made sure to put it in my list of places to go. I got the Dirty Bird which was made with their homemade BBQ sauce and a sunny side up egg with hand cut steak fries on the side. I ordered my burger with lettuce, tomatoes and avocado although they gave me guacamole {eh, I’ll take it!}. The burger was definitely delicious but it was a bit messy, nothing held together; I was practically piecing together my burger in order to get it into my mouth.

week 3 – Temazcal Cantina
This dinner was a double date; Dave and I and Dave’s brother and his girlfriend for dinner and comedy show. We got tickets to watch stand-up comedian Jackie Flynn at Laugh Boston. There were three comedians; the host Don Zollo which we’ve actually seen before, Chris Pennie the opener comedian which I would argue was the best of the three, and Jackie Flynn the headliner which I thought was eh ok. Since the venue was near the seaport district we had a few restaurants to choose from but ultimately decided on Mexican food [#ilovemexicanfood #imNOTmexicanimhispanic #whatsthedifferencebetweenenchiladaandchimichangaagain]. Dave and I were very family with this area having gone to Legal Test Kitchen a few times before (Dave highly recommends their fish tacos). I got the chili-lime skirt steak fajita which was amazing! It did however come with a piled high serving of onions {ewww}… I didn’t realize a scavenger hunt was part of this dinning experience.

week 4 – Not Your Average Joe’s
At this point  thanksgiving is just around the corner and I was fiending pumpkin real hard. I spent almost 20 minutes looking for a restaurant that would satisfy my pumpkin craving. Initially I was looking for butternut squash ravioli (I do realize that’s not pumpkin but it’s basically the same). We decided on Joe’s for their harvest mac ‘n cheese, made with roasted butternut squash, chicken and curly cavatappi noodles. My craving was definitely satisfied!

week 5 – Texas Roadhouse
This meal was completely functional. As you can see nothing fancy here just a good ol’ 6oz sirloin with a baked sweet potato. This was on Black Friday and after doing a little bit of shopping, later in the evening not like those crazy people waking up before dawn [#imnotjudging #thatusedtobeme #okmaybejudgingalittlebit]. I definitely indulged with the marshmallows and their delicious fresh-baked bread. And just like that November is over! 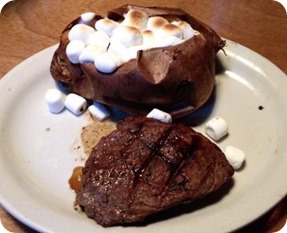 One thought on “restaurant month recap”